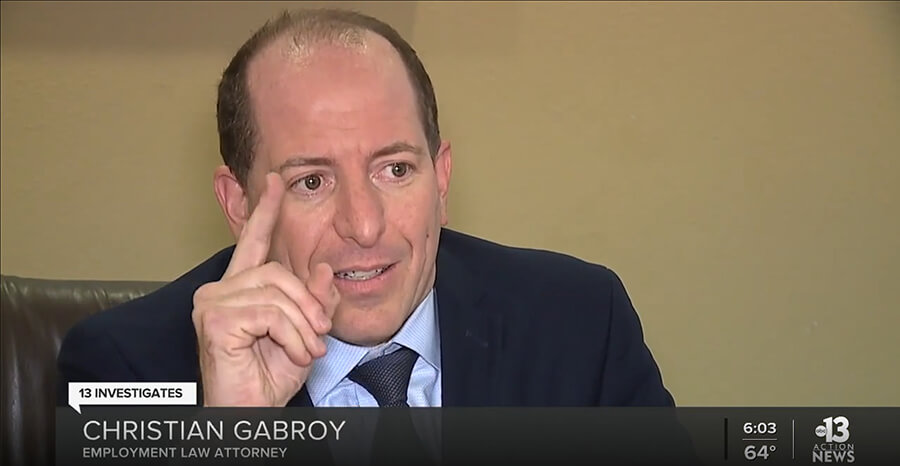 Robert Telles, a former Public Administrator, was indicted for the murder of Jeff German, a Las Vegas Review Journal reporter. County staffers who worked for Telles requested help but received very little. The responses 13 Investigates received may surprise you, as 13 Investigates discovered.

Telles and his female subordinate are seen in a video on the Review-Journal website. They get out of Telles’ car in a parking garage at a mall. Employees claim that Telles’ alleged affair with the subordinate led to an imbalance in power and a hostile work environment at the office of Public Administrator. 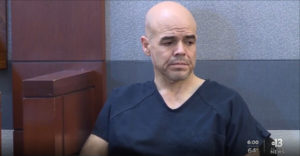 Telles, according to them, was a bully who controlled the office through fear intimidation and often behaved irrationally. He also prevented employees from going about their business.

They were looking for an immediate solution and intervention when they complained to the County.

“Couldn’t someone just let that person know that this is unacceptable behavior?” Reid asks. Reid replies, “It’s inappropriate and not professional.”

Janelle Lea, Investigator, began working in the office of the Public Administrator in 2020.

Janelle says, “I found it very solemn.” “And I thought, well maybe that’s just what the job is and what we’re dealing in.”

Janelle said that she was shocked to discover how employees lived in fear during training. She had even tried to question a colleague.

She was like, “no, we cannot talk.” Talking is not permitted. I will get in trouble. “Please don’t speak to me.

She claims that it wasn’t an isolated incident.

Janelle says, “I observed people shaking when he would arrive at work.” “And I made friends with a few of them, and they confided to me, and I realized that I didn’t need this kind of stress in my life.” “And I quit my job for a while.”

She felt the need to return a few months later. After their complaints to the County were not heard, she supported them and turned to Jeff German for help.

Darcy Spears: What were the expectations of employees when Jeff German’s articles began to be published?

Janelle: “I believe they expected the County would step up and pay attention.” Janelle believes that maybe they could raise awareness so that people can see what is really going on. “We lost Jeff because no one listened.”

Gabroy claims the County was a failure, comparing its response to an ostrich with its face in the sand.

Janelle claims she provided first-hand accounts of the incident to a Clark County H.R. Representative about Telles’ aggressive behavior with staff and his bizarre and threatening posts on social media.

“And they replied to me that ‘Your best option is to ensure he doesn’t get reelected.

Darcy Spears: “And as far your experience was concerned, you didn’t see any change?”

Rita claims that Telles’ attitude to the citizens his office was supposed serve was also problematic. One incident she recalls is when she asked Telles permission to host a man from out of state whose mother had died.

Rita says that “He refused to let me come in on a Saturday–at no additional cost to the taxpayers–to meet this man, to turn over his mother’s property,” Rita explained that this forced the man to stay in Las Vegas through the next Monday, putting his new job at risk. Telles’ insensitive comment later that day is still etched in her mind. “‘See? I told you he could do it if you just made him.'”

Rita says, “We had all the tools to make this very difficult situation easier for him and his family,” But we were not allowed to do that.”

She also told the County about what he had said. Their response?

“He is an elected official in the County. She says that there isn’t much they can do. “I was told my options were, you know, ‘How close to retirement are you?’ 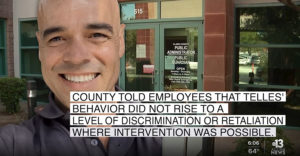 Gabroy was also asked by us about a statement the County made to employees, namely that Telles’ behavior did not rise above a level of discrimination and retaliation which would make intervention possible.

Gabroy claims that Telles’ alleged affair with a subordinate should have been sufficient evidence.

Gabroy says, “The after-effects from that and permeate from that–the fruit from the poisonous tree within the employment sector- it creates that kind of environment and creates the type of division that the law is supposed to protect.” It’s a shame. It’s a shameful thing to see the damage done.